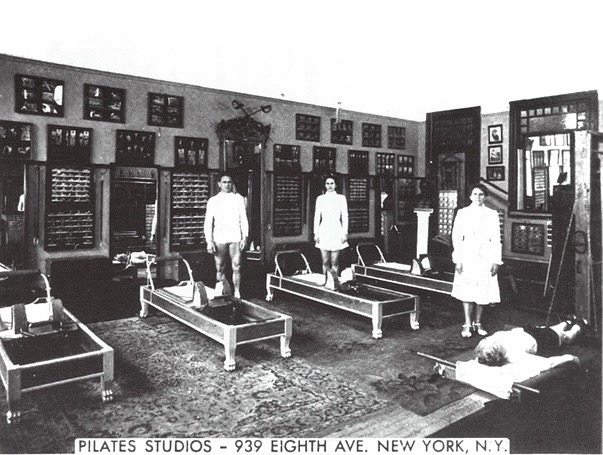 The Pilates Method of exercise is based upon the life work of the late Joseph Pilates, who was born in 1880 near Düsseldorf, Germany. The son of a prize-winning Gymnast and a Naturopath, Joseph was a frail child and turned to physical fitness programs to improve his health and wellbeing, developing talents in sports as varied as yoga, gymnastics, martial arts and boxing.

Interned in the during the war due to his nationality, he developed a fitness program for his fellow internees in order to maintain their health and fitness levels whilst being held in confinement – it is claimed that his regime was the reason why not one of these internees died from the influenza epidemic that killed thousands in 1918!

Returning to Germany, he came into contact with the world of dance, in particular, Rudoph von Laban, the originator of 'Labanotation', which is the most widely used form of dance notation. Hanya Holm included many of his exercises in her program and, to this day, they are still part of the celebrated 'Holm Technique'. At the same time as working with dancers, Joseph Pilates was also instructing the Hamburg police force in self-defence!

Joseph was then asked to train the new German army, but declined and decided to emigrate to the United States of America. On the boat trip, he met Clara whom he later married - and with whom he set up his first Pilates studio in New York, at an address he shared with the New York City Ballet.

His studio soon began to attract the 'elite' of New York with leading ballet dancers as well as actors, athletes, the rich and the famous, all attracted to a workout that built strength, balance and flexibility without adding excessive bulk.

In the past, screen legends such as Gregory Peck and Katharine Hepburn used the Pilates Method and, today, it is the preferred workout regime for leading personalities from the worlds sporting and entertainment industry. Yet, until the late 1990's, Pilates remained essentially unknown to the general public – how things have changed in that short space of time as an estimated 25 million people now take regular Pilates classes in the USA and some 1-2 million in the UK.

Pilates today is taught in several forms, directly reflecting the legacy of Joseph Pilates, who developed the method some 80 years ago. Upon his death, his 'disciples' continued teaching by adding their own variations to the core philosophy and exercises. The flexibility in the approach to the Pilates Method is one of the reasons why Pilates has become so successful over this time period.